Today I am excited to announce that I am joining Finsweet as their Chief Marketing Officer.

It’s a big leap for someone who just a few months ago was bragging to friends about how “I haven’t had a real job in more than a decade” and how "I am never going back to that world!”

But things change fast in tech, so here we are…

As part of this new role, I’ll be experimenting with long form content about the state of no-code, insights into the Webflow community, and personal thoughts about the growth of this new industry. My first post dives into the story of how I became so entrenched in the Webflow community and what brought us to this announcement. So here goes nothing.

The journey started back in May of 2019 when I published this site in an effort to land a job as Webflow’s Head of Community. I wasn’t really looking for work at the time, but something about that particular position spoke to me.

Having spent more than 7 years growing and fostering community online-and-off, as well as spending the last three years of my life fully immersed in Webflow and the surrounding community, I felt I was a perfect fit for the job.

Turns out I was wrong.

So I went back to doing what I do best. Freelance creative strategy, web design and video production. But I told myself right then and there that I was going to lead this community with or without a paycheck from Webflow.

I wasn’t really sure what that meant at the time, but I knew I had the chops to do something special in the no-code space and started plotting on how to do exactly that. I had already begun by organizing an official Webflow meetup in my home town, but that was local. Now it was time to get serious about community driven online events designed to reach a larger audience.

A few months later we produced a Webflow vs WordPress debate with an in-person panel and live audience. Instinctively I reached out to Nelson Abalos Jr. (Aka The Pixel Geek) to see if he was willing to participate. We had been chatting quite a bit up to this point and I figured he would be the perfect person to represent Webflow in a formal debate.

Initially I thought we would bring Nelson in on a remote video feed, but as the conversation evolved we decided he would fly out to our studios in Sarasota to do the debate in person.

With a packed studio and more than 100 concurrent viewers on the stream, it was an early indication that I was headed in the right direction.

Looking back now it’s easy to see this as the first in a series of successful online events focused on connecting the Webflow community. But at the time, it was just me trying to do something cool with the two things I do best. Community building and storytelling.

From there I continued to get more and more involved in the Webflow community. I stepped up my cloneable website game, started answering questions in the forum, began engaging with people more frequently on Webflow related social channels, and even served as a mentor on numerous occasions. I was doing anything I could do to build my reach in the community.

So much so that when I heard about NoCodeConf, there was no doubt in my mind that I was going to make the trek out to San Francisco in order to start putting faces to all the names of people I was meeting on this creative journey.

This was when I met Joe Krug for the first time.

I’d heard about his work as the CEO of Finsweet, but had never really crossed paths with him outside of a few comments on projects in the Webflow showcase. It wasn’t until later that I found out he had seen the hire-me website which made a lasting impression… But we’ll get to that in a second.

During and after NoCodeConf I put together a couple videos about the experience. One showcasing the workshop vibes, and another taking people on a behind the scenes tour of Webflow's headquarters in San Francisco.

Again, I was mostly trying to flex my storytelling skills in order to build exposure and gain credibility in the community, but I’d be lying if I said there weren’t bigger thoughts brewing in my head about how I might break into the space. With a background in video production and content strategy, I couldn’t help but think about what a media driven web platform might look like in the no-code space.

Eventually those early videos along with many others came together inside of a YouTube Clone that I titled nocode.video. Another project which caught Joe’s attention and once again led us to deep discussions about how we might use media to provide value to the ever growing community.

About that same time, I started reaching out to some of the other community leaders I had met at NoCodeConf and invited them to join me for a one-on-one interview. At the time I intended to turn them into a podcast but now I see it was mostly just an excuse to have deeper conversations with people I knew were going to be integral to the growth of the no-code community over time.

This is when Joe and I really started to connect.

We had interacted briefly at Webflow HQ but that early interview was the first chance we had to really start getting into each other’s heads. Something we would come to do often from that point forward.

It was on one of those early calls that I pitched a tool I wanted to build called Web Collector. A project that got both of us excited about building and empowering the growing Webflow maker community with advanced digital tools. In fact I cannot wait to tell you about the various tools we are building behind the scenes right now. But Joe told me I have to wait just a bit longer, so I guess I’ll save it for a future article. For now let’s get back to how we got here.

As my online relationship with Joe and other leaders in the community began to mature I started gaining confidence in my ability to execute on high quality online events.

It started with another in-person livestream focused on using the power of using community to grow your brand. I invited Webflow’s new Head of Community, Brittany Caldwell to join me in-studio to share her work experience doing exactly that.

Forgot to post pictures from the meetup last week. Thanks to everyone who came out. #webflow #meetup

From there we planned a speed building challenge that drew in about a dozen participants. Nothing crazy, but we all had a blast and the feedback from the community was overwhelmingly positive. It was a small win, but confirmed I was on the right track.

This was when I started thinking about how to get really creative with the next event. A back and forth of planning gymnastics that eventually became CloneComp. The result was a three day self-guided competition that drew more than 106 submissions from all over the world. And these weren’t just basic websites. From story driven websites to full fledged games, the things people created during this competition blew our minds.

As a comparison, Webflow’s recent Maker Day Hackathon had 37 submissions. Not that we planned to keep score or anything, but it’s hard not to get excited about your efforts when comparing the results of similar events.

In fact that success led me to think I could land the Senior Community Manager position at Webflow which coincidentally opened up right after the event.

I figured I was a shoe in for the position. I even got 3 pages of recommendations from Webflow employees and other leaders in the space.

But I was once again mistakenly optimistic.

I reached out to Joe in Slack and expressed the frustration of having put so much effort into this community and feeling like I didn’t get a fair look. Apparently I was notably upset.

To which Joe replied:

Which then led to a bit of back and forth between us over the course of the day and then to this message later that evening:

A message that totally caught me by surprise.
‍

You see, it turns out Joe had been watching from a distance as I planned those various online events. And even though we had talked a number of times about collaborating on different projects, we never did so in any official capacity. Just two ambitious entrepreneurs dreaming out loud.

I would later find out that after seeing Webflow pass on me for a second time, he felt compelled to reach out and make me an offer I couldn’t refuse. An opportunity to partner with Finsweet and turn my skills as a community organizer, creative strategist, and multimedia communicator into something much bigger than I could ever dream of building on my own.

Something I never even fathomed. Like I said at the beginning, Up until I applied at Webflow, I didn’t even want a job. In fact, I still don’t want a job...

Which brings us to this announcement.

My role at Finsweet is as an equity partner, which means this is much more than just a job. Between the amazing work Finsweet is already doing and the projects we have planned together, the potential for this partnership is unlimited.

Which means that as Webflow and the community around it continues to grow, you can expect us to start firing on all cylinders. We’ll continue to expand existing efforts around making custom javascript easier to implement on your Webflow websites while working to expand the functionality of an already powerful CMS. And that’s just the beginning

I guess what I’m really trying to say is that we’re about to roll out a suite of products that will blow the mind of every Webflow maker while working to connect the entire community along the way.

We’ll be stepping up our online events, building out additional educational content, and working to connect with all of the top Webflow experts from around the world.

Because that is what we do. And we have so much more in store for all of you.

But you’ll have to wait for the next article to learn the specifics about what comes next. 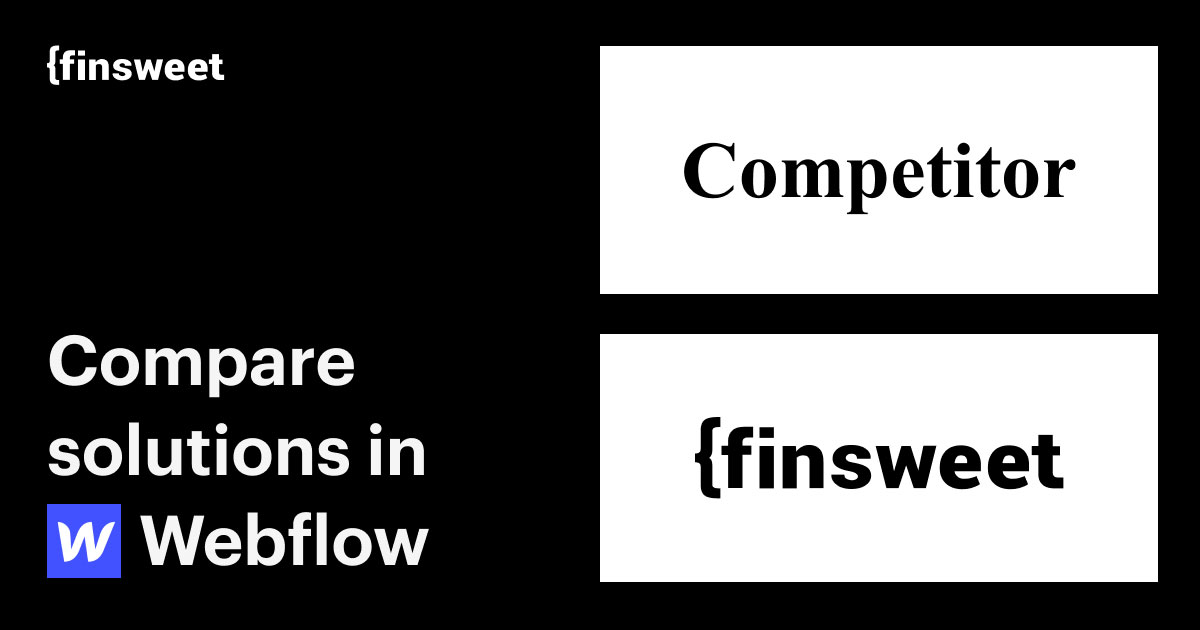 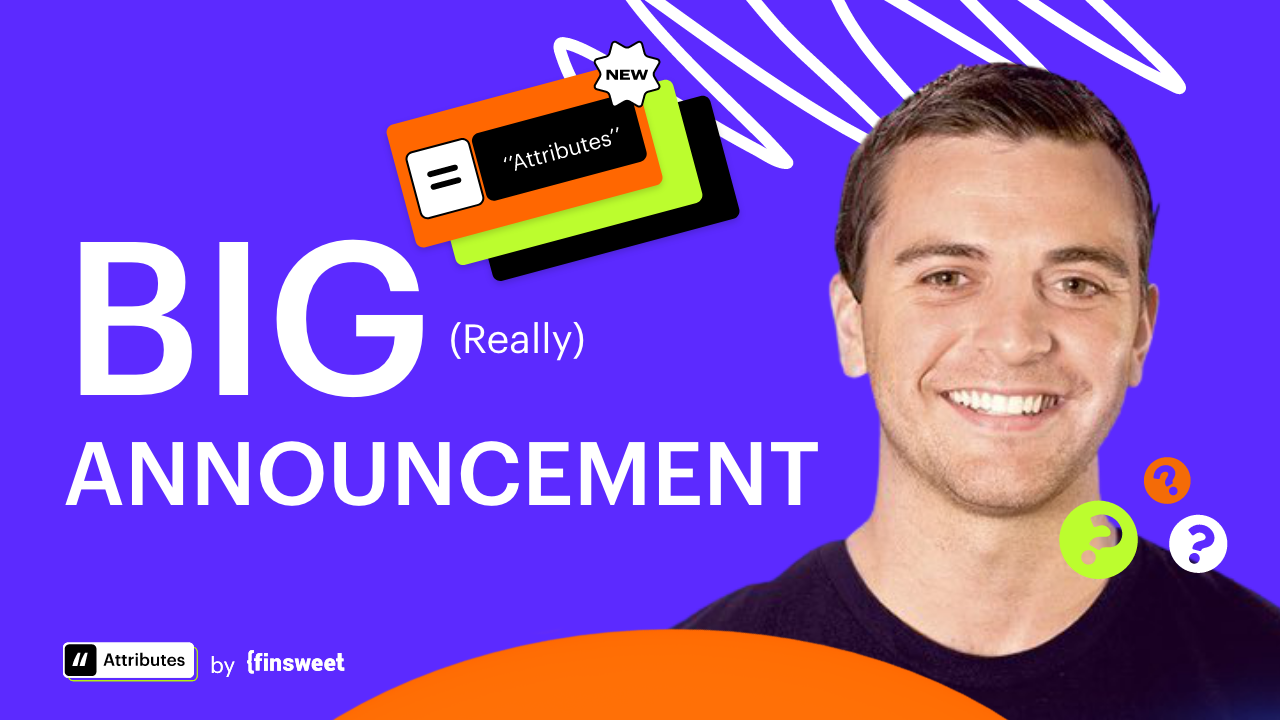 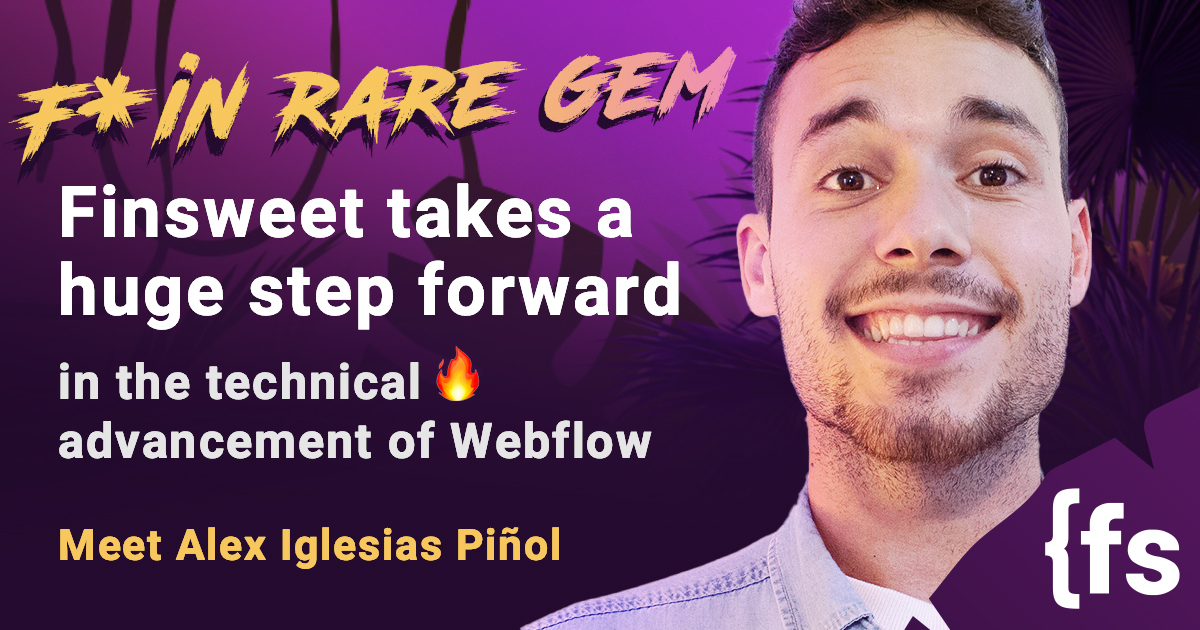 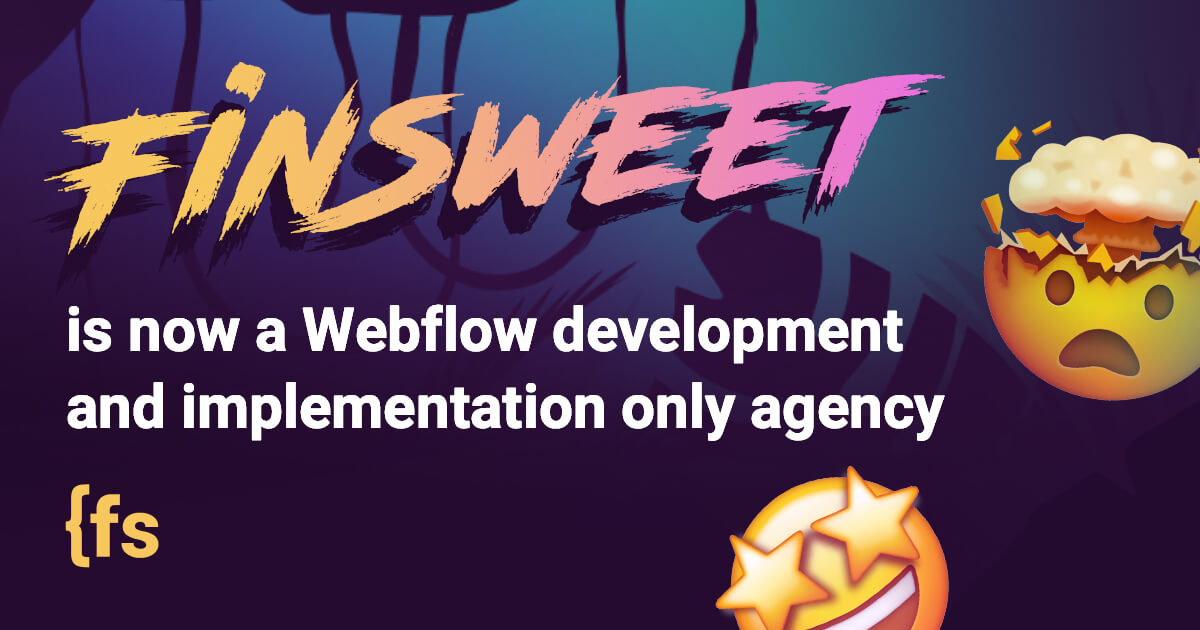 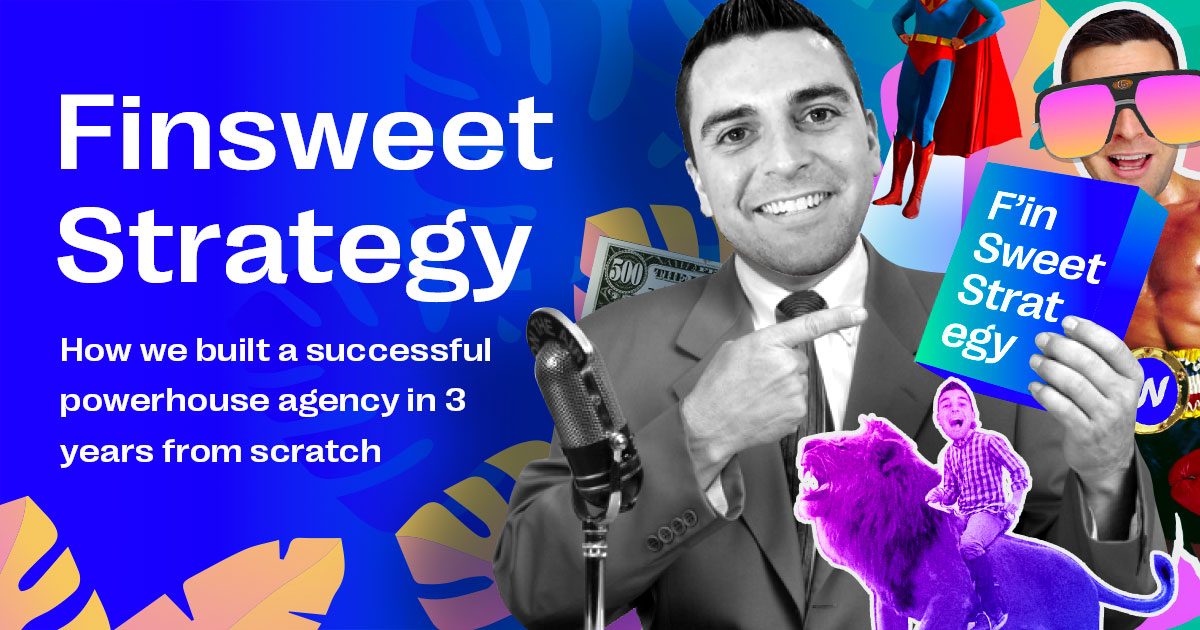 View the Story of Finsweet as a timeline of GIFs

Why I didn’t sell Finsweet for $1.24 million dollars

A weekly livestream dedicated to helping you grow your Webflow web design business. 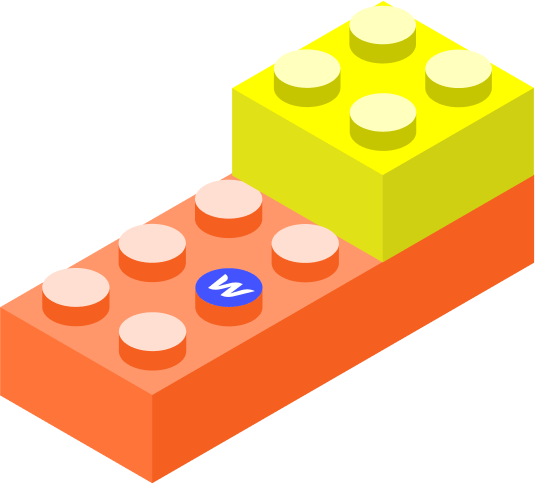 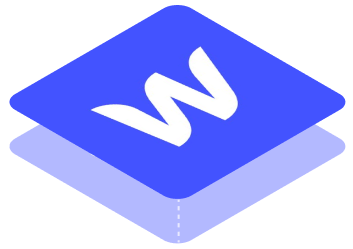 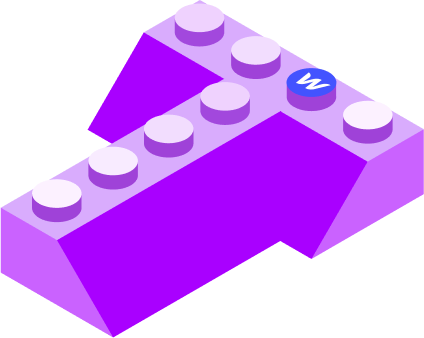 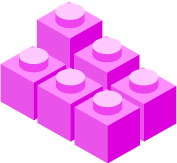 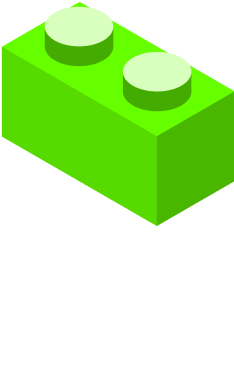 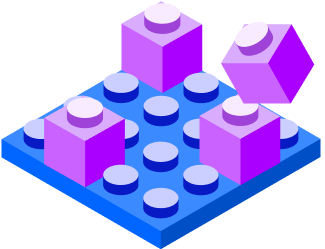 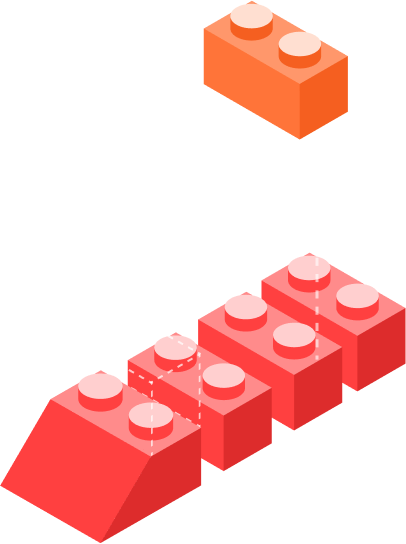